One thing which strikes many of our visitors, are the sounds of the camp, notably the birdsongs. There’s a constant chatter, be it the bickering weavers fighting over scraps of posho, the cooing of doves or a bubbling coucal call, there’s always a bird sound to hear. When we first moved to the land, before the camp was built, we camped at the top of the hill beneath two acacia trees. It was a fantastic spot, only abandoned when the cows took too much of a liking to the tent and there was the real threat of being trampled while we slept. Every morning at our hill top camp one bird would start its calling at 5am in the tree just above our head. Every morning. It was a mixed song, at once sounding mechanical and melodious. I couldn’t figure out who it was as every time I moved to look out, it would take flight out of fright. The mystery of our early riser remained until I eventually picked out its distinct call in the dawn chorus and found it sitting on a branch. A fork tailed drongo. Mystery solved.

The fork tailed drongo it seems is the most determined of songster, always getting its call out whenever possible. It’s the first call you hear in the morning, before the other birds chip in to produce a magnificent dawn chorus. On full moon nights, you find they don’t go to sleep, instead their mechanical warbling is heard when you go to bed, when you wake up and when you pop out the tent for that midnight pee.

The trilling cicsticola is another call which often rings around the land. From the uppermost branches of a bush it stands, beak open wide and throat vibrating with calls which, as the name suggests, trill. Their squawking alarm calls accompany all walks on the land, alerting everyone to your presence. One of the reasons why, for the best bird viewing, you should just sit still (the hide, forest platform and benches around the land are the best spots for that). 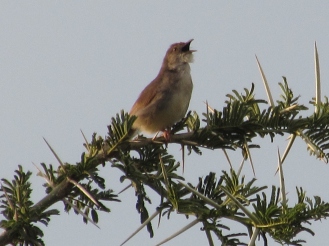 Arguably no call quite compares to that of the fish eagle. That gull-like cry evokes emotions in all who love Africa and to this day I will always stop what I’m doing to listen. They throw back their heads, seeming to raise their call from their belly, up in to the endless sky. Most magnificent is to watch as they play in the wind, which whips up the hill in the afternoon, soaring in circles and throwing their heads back in flight to call out. We have one pair of fish eagles on our land with other pairs on the neighbours either side. With six adults in close proximity our ears and that of our guests, are treated daily to this distinctive call of the wild. 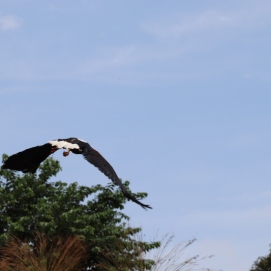 So if you find yourself at our camp, take a moment, lie in bed in the morning and listen to the magnificent songsters. A delightful, natural chorus awaits your ears!