Well it’s been a mad whirlwind week, one filled with wildlife, adventures and education!

We hosted the International School of Uganda for 3 nights at the camp on Tuesday. Every year in this school all the students from 6th-12th grade head out on an excursion. Some go to wander the hills of Fort Portal, others head to Jinja to enjoy some time on the river Nile and one class comes out here to Lake Mburo. This year we had 36 students with 6 teachers and 2 bus drivers descend upon us for what turned in to the most fun camp we’ve ever done. 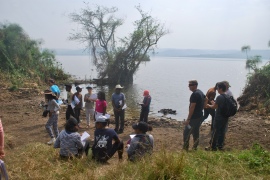 While students were expected to learn new things on this trip they were also very much expected to have fun. The obstacle course saw its maiden run. While Andy and Penny, our previous volunteers, had all but finished the course, our new volunteers Joanna and Daniel put the finishing touches to it. They were responsible for getting the kids out and about the course, poor Daniel was the one to demonstrate how to army crawl through the last muddy slog. The kids were knackered and muddy at the end of it but had enough energy to cheer on their teachers as they too took on the mud. All got cleaned up fast enough afterwards with some time on the slip and slide. Despite the yelps of pain as they bumped down the slope they came back again and again to the top and launched themselves down the watery, soapy slide.

Our trip in to the park held a great surprise for them. The python which had been spotted earlier in the week was still in residence in the dam. While it had regurgitated the baby waterbuck it had eaten, it was still a very impressive sized snake. It was a special sighting for one student who kept his snake guide close to him through out the whole trip. That evening around the campfire he read out the information on pythons to his eagerly listening classmates. We were lucky enough to spot at least one giraffe, Batgirl, on our drive out of the park. The students got to fill in the observations sheets used by the giraffe researchers giving them a practical taste of wildlife research. These sightings combined with the hippos and crocs they spotted on the boat trip gave them a wildlife packed park experience. 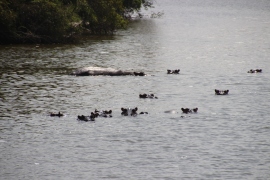 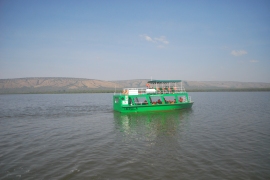 Being out of a classroom, interacting with classmates in a different setting and seeing real life uses of the information they are learning in lessons is such a valuable asset to education. We had a student apply their mathematical skills to determining if Usain Bolt could out run a hippo (he can’t), they navigated using the cardinal points something which often causes confusion in class (writing on papers and walking the directions are two very different things) and they showed empathy towards each other, supporting one another in a setting outside of their comfort zones.

All in all the students, teachers and camp staff were all happy come Friday. It was an action packed few days, one we hope the students remember for many years to come.